Thanksgiving, after all, is a word of action.  ~W.J. Cameron

So most of Chelsea’s friends have received their “coveted” driver’s license for some freedom. I’ve been fine up until last weekend with her friends picking her up and doing “whatever” teenager’s to past time in these hot summer months. Last weekend we had torrential down pours, with lots and lots of lightning and some city streets flooding. I mean really torrential, the kind where you’re driving and no matter how fast your windshield wipers are going, it can’t keep up. 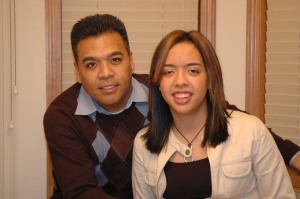 Just based on my many, many, many years of experience (hope I didn’t date myself too much), I know it’s the kind of down pour that causes you to say “I think I’ll pull over until this lightens up.”. As I’m looking out my front windowing admiring the power of Mother Nature, it dawned on me that her friend who just picked her up to go to a “softball” game before it rained, just got her license and probably hadn’t experienced driving in the rain.

So I did what I thought most parents would do. I freaked out a “little”. I promptly called her cell phone. Ring…. Ring…. Ring…. (well on her end it’s not a ringing tone, but a hip-hop song called “All That”). Anyway, she’s not picking up and of course my mind is racing with only bad thoughts. Well, every 5 seconds it was a thought of something else, but hey I’m a male, it’s allowed. I hang up, dial again, this time she picks up. The conversation with her goes like this:

Chelsea: “Dad, it’s Matt, we just picked him up and Erica and him are going out.”.

Dad: “Really?…..Hmmmmm….Ok, make sure you call me when you get to the softball game.”.

We exchange a few more “pleasantries” and hangup. I look out the window watching the rain, then it dawned on me….. I was an A$$. Right then and there, was the realization I had to start letting go. Sigh….

Where you come for Cybersecurity information, a little enlightenment, laughs, and maybe some advice.

WordPress.com is the best place for your personal blog or business site.